As you may have noticed I'm usually not short on words, even though the English Language ain't my first one and it seems to occasionally fight me all the way. That seems less by trying to express myself but more so in trying to understand my fellow man. My linguistic filters kick in real fast, sometimes maybe a bit too fast and it can lead to misunderstandings. If you ever hear me say, "..SOOoo what is it again you want to do?!", it actually means NO, I'm not interested in helping you and NO I'm not interested in hearing about it any further, NO as in pardon me, my fucking filters just kicked in and you've been filtered out as "special". By this I'm not saying that I think you fell off the short bus, only that I'm aware that the world is full of special people kinda like you but not really and I think you are unlike them which actually really makes you one of them. Nice to meet you, but right now my filters are working overtime, ..SOOoo what is it again you want to do? 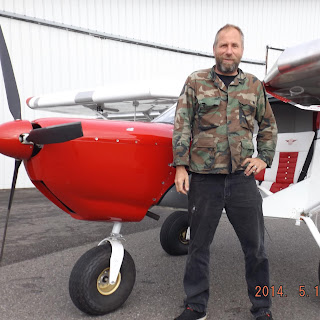 Frank is undoubtedly one of these special folks and pretty much the kind a guy that if you tell him it can't be done, he will show you a way on how to do it. My kind a guy in many ways, free spirited, strong minded, but with a certain lack of what I'd call healthy fear. Fear is good, fear keeps you alive, but fear can also stop you from doing anything at all. Having worked with people in extreme adventurous situation all my life, spend hours on Predictive  Index, Managing for Success and lots of other "schmooze training" with CMH, done a Banff Centre Management Course it still sometimes hasn't prepared me fully for these type of personalities. It is nearly impossible to manage them, at best you can assist them to acquire new skills and hope for the best. In Aviation this is a scary thing, as you can teach them to fly but not how to make always sound decisions, at least what you as the instructor would perceive as a "sound decision".

Frank called me one day and enquired about learning how to fly. He's got a ranch up by Fort StJohn and would like to fly from his home strip. Nothing wrong with that idea. Start with the usual steps, Medical, Ground School, get the paper work done and then come and see me for the fun part, the actual flight training. 6 weeks after the first call he was done with the ground school and on his way down from the great white north to slightly greener pastures here in the Cariboo.
Get him checked in into our luscious accommodations on a "Pilot Rate" and off we go to the airport and start our training on OHW. Things are progressing well and they usually do when you have guys with a bit of previous exposure to flying and even more so with folks that operate machinery. Used to pushing levers and getting a certain reaction from the machine, it's just the added rush of leaving the ground in the process. Of course its a hell of a lot faster than your old John Deere AND to make it more of a challenge you have to learn to land the bloody thing!

Didn't take Frank long to catch on, but the April weather sent us some more snow and with the outlook rather poor for the next week to 10 days we decided to split the training into two sessions. To say that Frank was totally enamoured by the 701 would be an understatement. No big surprise there when compared to the powered parachute he had a chance to fly previously. He was becoming seriously interested in buying one, no real surprise there either! With Hans more or less gone to his new domicile in  Columbia and having little use for it, it was just a matter to come to an agreement. And so Frank went home as the proud new owner of OHW and figured next time down he'll take the bus to fly OHW home, right across the Rockies on his first major X-country. 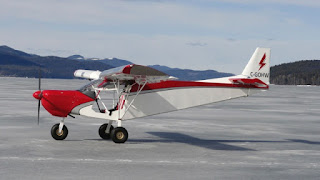 How could one note be enamoured by this beauty?

Needless to say the filters slammed down once again real hard and were immediately followed by that question in the first paragraph of this post. Maybe consider the "alternative" and safe route along the highway. I mean IFR, as in I follow roads, rivers, railroads and so forth. Nope, he was set and its gonna be across to Tumbler Ridge and home from there. It kind of left me in silence which basically meant it ain't worth the argument! Still some time to go by and training to be done before it will happen.

Part two of training was completed and as planned Frank was ready to fly home. Working down the list as usual, as the time arrived to solo some high speed taxi's guess what, ..take me and my rather heavy personality out of a 701 and the thing just flies off. Having learnt a lesson the first time and briefed Frank on the incident, to him it did not come nearly as much as a surprise when OHW decided to loft itself once again to higher levels. This was followed by 5 touch & goes, a bit of a shaky landing and a huge grin. Good on you Frank, ..but it was supposed to be a "Taxi Exercise" not a first Solo. Lesson learnt in all this; once you get out, you better have your student ready to go flying! Finishing off the solo part is easy as it is only 2 hours and with a perfect evening you might as well keep going. While Frank is zipping around CZML with his new Perma-Grin I decided to check the weather.

Not the greatest for the his intended flight home and even worse in the days to follow. So the decision was made to leave early and follow the Hwy to Quesnel, west of Prince George and on up to Mackenzie. Fuel up and than either follow the Hart Hwy though Pine Pass to Chetwynd, out towards Hudson's Hope and turn NE for home. Good Plan, much better than crossing the Rockies, Thank you Weather Gods!
Dropping Frank off at the airport and after helping him ready to get going there is really only the worst thing left to do; sitting helplessly at home on your computer and watching little icons appear upon every page refresh in the Spot Tracking page. I personally insist that anyone who goes solo on my watch carries one!! I highly recommend to anyone who leaves the local circuit to use one as well! Remember Hans going into the trees at CZML, the aircraft disappeared into lush greenery and not 50m away from a busy highway could not be seen. AND his ELT never went off! We have been using Spot Tracking since 2007 in our company aircraft with great success. I could fill a few pages worth on why to use them, but believe me there is very few excuses not to!!
Going good, all to plan, little slower than figured and Quesnel as a fuel stop. Man, you can zoom in and actually see the location icon being right at the fuel pumps. And off we go again, slightly west to avoid Prince George Airspace, next bling, OK more west, another bling, even more west, bling again, wtf?, ..how far west is he going? At this rate he's going to be in Vanderhoof and not just W of PG! Send him a text on the mobile phone, lets see if he gets it? Next bling, 90deg E from the track and in line for Mackenzie. You gotta like modern technology!! There is free ice cream at Mackenzie Airport if you fill up so why would you not stop there? Getting the latest Metar's and this sidetrip having taken much longer than figured put Frank way behind. Winds have kicked up and his landing in Mackenzie was a bit rough so I was told later by him. Horrible x-wind and gusty as hell, his words, not mine as calls me confirming his arrival. I told him to have a afternoon rest on the couch, let the winds subside and have a beautiful evening flight home. And so he did, a bit rough through Pine Pass but after that great cruising at 9500' all the way home.

Couple days after getting home Frank addressed some minor vibration issues and we decided to maybe change the rather dried out out and cracked engine mounts. Change completed, test flight, engine failure in take off, lack of fuel was the culprit and after closer inspection a pinched fuel line. This was followed by another phone call, "Willy, you adjusted on propeller blade wrong. It's way out of whack!" Not possible so my reply, as I always double check after the final torque and I knew they were dead on when we installed the new Warp Drive propeller. Check again, well guess what? The propeller blade is moving inside the hub, no not the hub, the hub thats glued to the blade.. WOAH, that's a Warp Drive Problem, I'd say a serious problem and while I've heard of it I actually never came across one. Good think the guys at Warp Drive are really good to deal with when it comes to warranty, but of course Frank cant wait and has to source his own slightly used prop that turns out it didn't fit or work, can't recall anymore. Anyhow finally its all up and running again a many a flights followed. OHW once again not only crossing the country, but high mountains, open oceans and endless forest wilderness. I guess it takes a guy like Frank to do these kind of trips, the 701 doesn't know any better what's below and Frank has fullest trust in his abilities flying his birdie to all these exotic exciting places. And then came the move to Grand Forks, BC and with it another somewhat "memorable" flight I've been told. New playground, new challenges, upgrade to passenger carrying, full stall and wing drop on take off, the adventure just never seems to end with Frank being Frank and doing what Frank does best, seeking out new adventures and expanding his aerial horizons. And it finally let him back to Renata a nice beach he has been before, except on this day it wasn't all so nice to him. A light wind, not too much but hard to get pegged, just getting played on final, a bit of a drift and seconds after touch down its all over. The world literally has just turned upside down for Frank in C-GOHW! 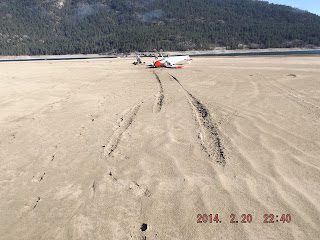 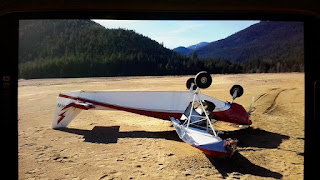 At least Hans kept it right side up!

In some ways and as stupid as it sounds there was a certain amount of relieve in all of this. While the plane was done once again, Frank was perfectly fine and given all the previous incidences we thought he'd probably hang up his wings and call it quits. I should have known better, not Frank, not by long shot, and the adventure was about to begin for him all anew but in a different plane.

As for C-GOHW, it's not over yet, the story continues. See our next post.
Posted by Willy Trinker at 14:36 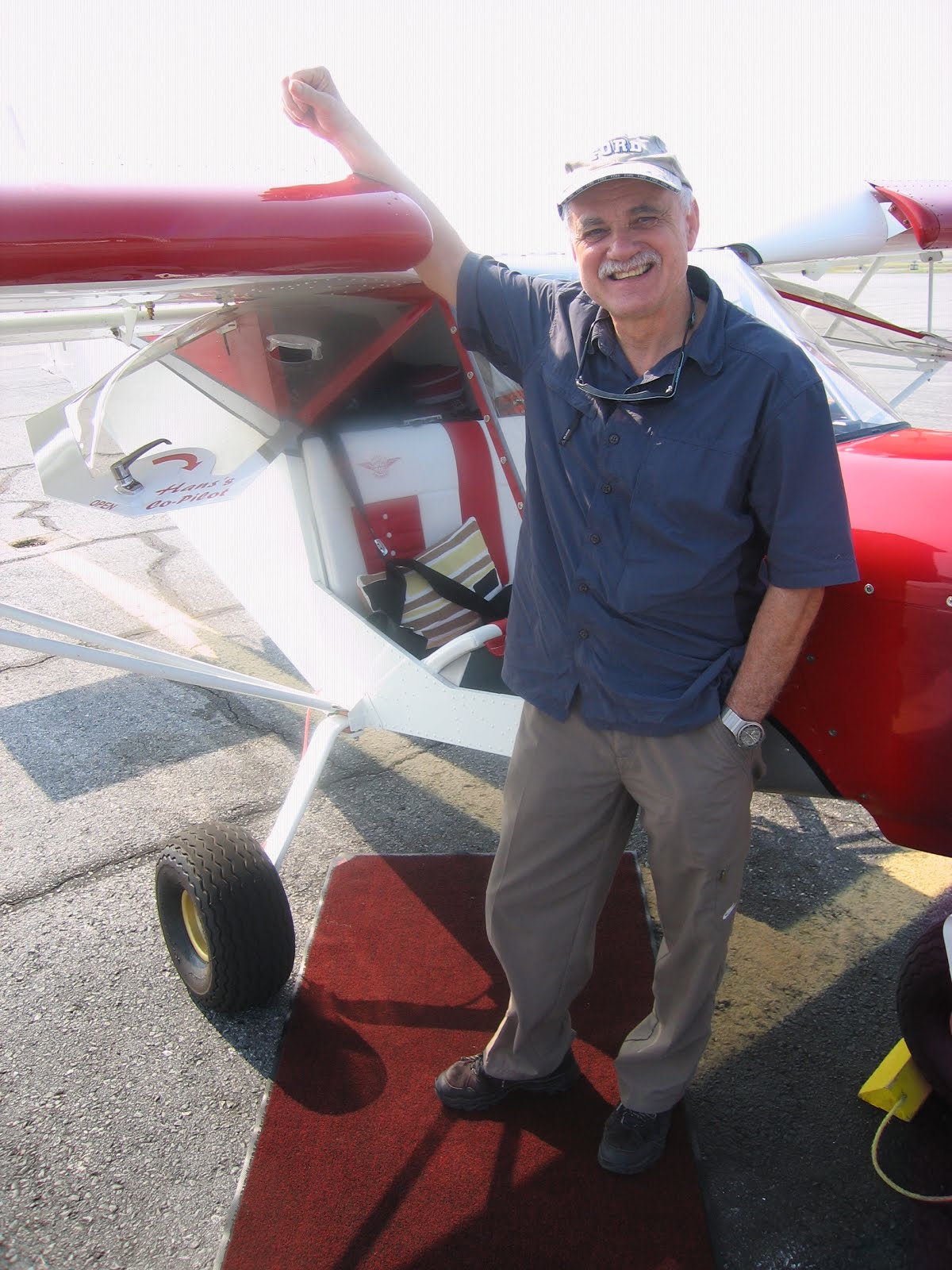